“Our festival isn’t just any festival. Take it all in — the shrine to the torii, through the torii to Mt. Fuji, the sunset bathing the mikoshi — it is awesome beyond description…” –Shimada Yoshihiro 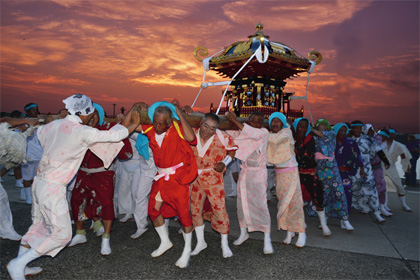 Come to Mera’s festival for two reasons:
it is macho itself;
and it is entirely local.

So macho and so local, in fact, that tourists are few and far between, and if you have the nerve, Mera’s revelers will be happy to thrust you into their midst and share with you their pride and joy, “awesome beyond description.”

The O-mikoshi, largest and most lavish of Mera’s portable shrines, carries the spirit of the so-called “Impetuous Male God” Susa-no-o. Lacquered and gilded, it weighs well over a ton, and it’s top heavy at that, “so it really sways when we rock it.” Plus, it has to begin its journey into the village with a steep descent down the shrine-ground stairs without hurling itself into the street below.

By mid-afternoon on festival day, the priests have transferred the gods to their mikoshi and the lay people have drunk some sweet sake and are milling about. “The flute begins,” says village elder, fisherman, merchant, and flutist Shimada Yoshihiro. “It’s a soft voice, so everyone has to quiet down to listen. It’s telling a story.” The big drum sounds and for the next 20 minutes, the lead mikoshi is bounced and shaken enough to content the most un-ruly god.

They wind through town and rock and hoist the shrines and stop for greetings and thanks, rest and sake. Excitement and exhaustion combine into a kind of breathless ecstasy and the shrines make a sunset stop at the shore.

By about 5 pm, make your way toward Mera Beach, where tall lanterns are planted crosswise into the sand to catch the setting sun. “We can’t take the mikoshi into the sea anymore,” the townspeople explain, remembering the last year they did – 1960, ” because it costs 4-5 million yen to replace and the metal would rust. But we still go to the beach straight into the setting sun.”

Stay till you can follow the mikoshi through the dark alleyways on its way back to the shrine. It’ll come to a hill where the road is so narrow that the bearers have to keep their hands tucked in and carry the crushing weight only across their shoulders and drive themselves up the hill in a single thrust of power. Locals say that even bearers who come from boisterous Sanja Matsuri in Tokyo’s Asakusa district don’t have the nerve to join in here.

Behind the Scenes: The Romance of Macho

“Wear something white,” Shimada offers, “and you can participate, even if it’s just for one minute. Even 15 seconds.” In fact, they’ll enlist you to help – they’ll even hand you a happi.

But don’t underestimate the weight of Susa-no-o or the impact on your body of all the shaking and lifting he demands. It takes fully three heave-ho’s for 30-40 men just to raise the mikoshi off the ground.

Still, “if you have to cushion your shoulder with something, it means you don’t have the guts. You’ll be laughed at, and the girls won’t want you. Being able to carry a mikoshi is a matter of will, not of strength. You want to, so you do.”

Exertion and exultation, pain and pride: the festivals are all about the vigor of youth and the joy of physical release. Mr. Shimada shows off his festival callous, and another on a friend’s back: “It’s been 20 years since I carried the mikoshi and my callous is still there. It’s a man’s pride — my pride.”

In his youth, the guys spread women’s pasty face powder on their shoulders to stop the bleeding and firm up the skin. “You’d ask a girl you liked for her powder, and she’d help patch you up. That was the beginning of love. Real romance. Now all you have is Valentine’s.”

Behind the Scenes: The Village

Mera lies at Tateyama’s southernmost point, where the Pacific’s subarctic and tropical currents collide. You might miss it altogether from Rte. 410 up above, but it’s a sizable village whose tile roofs spill down from the ridge road all the way to the sea.

It was once prosperous to the point of extravagance, boasting a bank, hospital, fire station, pachinko parlor, cinema, geisha house, and 5 public baths. Spectacular catches of maguro seemed a matter of course. “Once in 1960,” Mr. Shimada recalls, “we made 500,000 yen, paid in 1000-yen notes. Everyone got bundles of 10 bills (they spent it all on sake)! I was the Union chair’s oldest son, so the leftover bills came to me. I was so rich when I was 12, I had a transistor radio!”

No one remembers why the young men at peak virility dressed in women’s clothes to carry the mikoshi. “The idea was to borrow pants and a yukata from a girl you liked, then get yourself all blistered and bloody, because you couldn’t return something in that state. Then you’d have to go into Tateyama together to buy her a new one!”

“That was,” Mr. Shimada adds, “back when the maguro were prolific.”

Behind the Scenes: The Music

Shimada — fisherman, merchant, flute player and teacher, who in his youth manned the mikoshi at its front right where it lands most heavily — has been the festival’s lead kiari singer these last 15 years or so and has 50 years of experience.

He draws out his lines to allow the bearers a rest, accelerates to urge them on, faster, harder, fanning their frenzy.

Some verses run to love and lust; others to legend; and some evoke times past, when maguro was abundant and money ran like water.

“Hou-issa!” is the response. Staggering under the weight of Susa-no-o, the bearers haven’t the voice for more.

Behind the Scenes: The Ropes

Two weeks before the matsuri, festival elders buy rope at the local home center. They then remake it into something strong enough to secure the mikoshi on its rounds.

” They say Susa-no-o likes a wild ride, but still we gotta be able to hold him…. ”

Ordinary rope will just stretch when pulling 1000 kilograms. “So first we take apart all the rope we bought, strand by strand. Then we braid it all back together again. We soak the rope in water, then stretch it, pound it, and twist it. In the end, it will have the give we need, but it’s tough, too. ”

Rope making requires a crew of 16, four at each pole (“all over 65, or they don’t have enough experience”), and a man in charge (“he has to be a real leader, or you won’t get a good twist”).

The matsuri‘s must-see begins at sunset.

Meanwhile, it’s July and beaches beckon. Head a little east to secluded Nemoto, a favorite for sand, scenic views, and camping, or west to the flat rocks of Aihama. Further down the road are the Heisaura beaches and sand dunes. 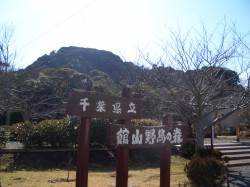 For shade, seek out the trails of the wild bird preserve at nearby Yacho no mori; take a break at one of the overlooks or on the grounds of Awa Shrine.

In Mera itself, visit the remains of medieval graves and early modern schools, and the marina that was so lively a generation ago. Maps are available online.
Bring water and sunscreen, hats, towels, parasols — and more water.