You’re standing at the foot of a flight of stairs so steep and with steps so numerous that it disappears into the towering green of Mitarashi Mountain.  A fluttering banner appears up high, and then a glint of gold. All at once the mikoshi is plunging down toward you, threatening to tumble its bearers head over heals and crash headlong down on the rocks below.  Your heart pounds. 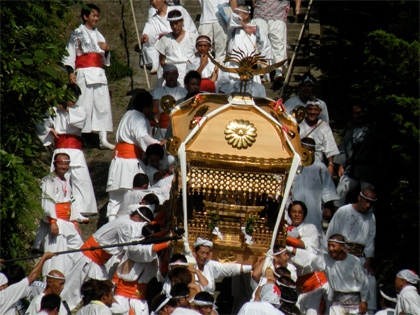 The staircase is narrow, and the bearers few.  They wear white pantaloons and long white tunics, and broad orange sashes with golden chrysanthemum crests that glitter in the sunlight.

Back and forth they bound across the steps, side to side they sway the mikoshi, heaving it, tossing it, stumbling toward the large-leaved jungly greens that line the path, knees bent to ankles.  The mikoshi is practically on its side, the bearers on their backs, until it veers back again, “swerved by the god inside it.” As if in acknowledgment, the men raise the mikoshi aloft, arms stretched as high as those on the lower steps in front can reach.

Trees sway in the salt breezes. Cicadas cry; the golden disks dangled around the little shrine jingle along. The men slow, barely moving in the mottled shade, till the kiyari singer rouses them again to more wild swaying and tossing.

In the shrine grounds below, amidst the food stalls and onlookers, they will raise the mikoshi overhead again, leap in whirling circles, revolve and spin, orbit and reel, carrying — or being carried by? — the gods.
It’s a huge mikoshi.
They pass through the torii, heading toward the sea and Mt. Fuji beyond. The priests perform rituals of purification and prayer, offering a morsel of sacred sake to the vast sea. Up on the grassy embankment, tiny kids in sun hats and white tunics, wave and hoist their own mini mikoshi, the youths their larger one and the men theirs, to the strains of the kiyari song, now gritty, now high-pitched and childish. The sun glints off the gold, the shadows lengthen, the white cottons blow about in the breeze.

At 5 o’clock, the neighborhood chimes sound, just as if it were any other day. Time to lift the mikoshi and bring it back up to its home. They take it all the way up in a single bound, to reach the top before the sunset passes into darkness. “Your knees just want to laugh,” says a regular.

Sunosaki Shrine harks back to the primordial.  Its mikoshi processional is a physical triumph that calls to mind the feats performed by heroes in ancient fairy tales. In the words of a recent blog, the rites and rituals, singing and dancing, sea and sky — “intangible cultural treasures” all — “make you think you are seeing the very origins of matsuri.”

August 21-22  3~5:30 pm The mikoshi processional begins about 3 pm on August 21. Spectators watch from the bottom of the stairs, to keep out of the way, and to experience the heart-stopping sensation of the mikoshi‘s descent. The bearers claim that it’s only the spectators below who really hold their breath and break out in an anxious sweat. From the steps, the bearers themselves are awestruck by the blinding glint of the mikoshi in the late afternoon light and the view of the sea in the distance, but it’s hard to imagine how they can shift their attention away from their footing long enough to absorb it.

Join everyone for a snow cone on the lower shrine grounds, because it will be hot.

At around 4:30, follow the small family groups and mikoshi bearers across the street towards the sea. Find a seat on the grass. Keep an eye out for red-faced, long-nosed Tengu purifying the mikoshi. Have a drink; watch the kids. The grassy embankment is perfect for a  pre- or post-processional picnic. Climb around the rocks, watch for passing boats, and bask in the breeze. This part of the matsuri is slow, local, intimate, like a lazy summer afternoon spent watching the drifting clouds with a friend, only now and again the monstrous tengu mask or the wistful kiyari chant transport you to the alternative space/time of an ancient matsuri.

Aug. 22, afternoon into evening. If you spend the night in the area, come back the next afternoon for the minoko odori dances on the shrine grounds. No one knows the origins of the dances anymore, young girls in circle dances praying for safety on the seas, elder women paying thanksgiving at harvest-time, dances of exorcism or purification, or just plain entertainment.

If you climb the steep steps up to Sunosaki on any ordinary day of the year, you have a banister to help take some of the weight off your knees. But the banister is removed for the festival, because it takes the entire width of the stairs to absorb the swerving mikoshi .  The mikoshi  itself is kept from sliding straight to the bottom by two ropes anchored at the top of the steps.  Just two ropes, as more would curb the swaying.  Two men manage each rope to release just so much at a time.  They have to be, as  you can imagine, “dai dai dai senpai,” the “very, very, very experienced elders.”

Once upon a (mythological) time, Japan’s first emperor, Jimmu Tenno, sent an emissary, Tominomikoto, to find a rich land. His ship carried him into the waters of Uraga Channel, which links Tokyo Bay with the Pacific, and he set anchor at Sunosaki Cape. His “rich land” was the tip end of Tateyama.

Later records say that Tominomikoto enshrined a mirror there that had belonged to his ancestress, in what became Sunosaki Shrine. A dragon once threatened havoc, according to the shrine’s own lore, but seven days and seven nights of prayer brought the intercession of the gods. The shrine’s stone steps climb deep into Mitarashi Mountain, where forest and copse grow undisturbed: no ax is permitted to trespass the sacred space. Passing fishermen stop to worship there, because the cape has always offered safe haven to seafarers. Once upon a time, they made protective amulets of women’s hair for their boats, and Sunosaki Shrine, too, enshrines a lock of an ancient lady’s hair.  Medieval records tell of the prayers there that saved women at peril in childbirth.

On a sunny day, the Izu islands and Hakone mountains ring the view, and Mt. Fuji dazzles, framed in a shrine’s torii.

What To Do Meanwhile 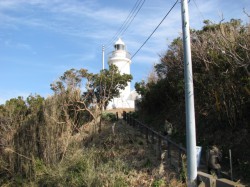 The road leads round toward Sunosaki Lighthouse. Tile roofs in every hue cluster below, and wildflowers grow on the pathway. Climb the stairs to the lighthouse landing for a sweeping view of the sea and all the islands in the distance.

An  offshoot path leads you to another viewpoint, known for a particularly spectacular sunset view of Fuji, and beyond to a tiny, shabby hut of a shrine, an outpost of Taishakuten, the Tokyo home of beloved movie character Tora-san.  A little way-station sits at the foot of the stairs, offering assorted sweets and drinks and fresh vegetables for sale, vending machines, a post box, and some benches.  It’s a popular stop among cyclists.

Find a quiet moment to walk around the old buildings and ancient grounds of the shrine itself.  The bearers marvel at the blinding glint of the mikoshi in the late afternoon light and the view of the sea from the steps. See their vantage point for yourself.  If it is clear, look for Mt. Fuji through the torii.

Note, though, that summer days are usually hazy, so you may never catch the vaunted views of Fuji.  But everyone knows it’s there; it’s almost as if they see it right through its cloud cover.  Pretend you have magic glasses that reveal it gleaming in the distance.

For nearby beaches, head to Banda on the Bay side.  For biking and summer wildflowers, Heisaura on the Pacific side.