“A friend once told me ‘Tateyama’s festival is epic!’…and now I know why.” (This Is Where I Live) 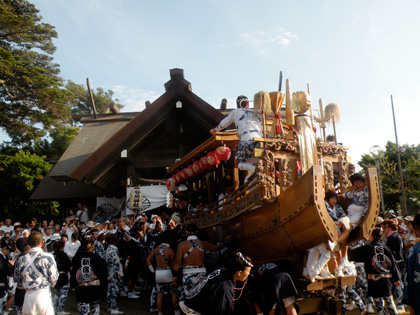 The portable shrine comes flying down the long approach to Hachiman Shrine, through the torii gate, and all the way to the main shrine building, and without pausing for breath, the bearers sway and toss and heave and hoist it, away and back again, away and back. “Oissa, korasa!!” they shout. It’s only when the next mikoshi shrine is right on their heels that they move aside.

It’s the very last of summer, hotter than hot under the blazing sun, and hotter still with all the swerving and swinging.

The Yawata festival, affectionately known as “Yawatanmachi,” is the biggest event of the year for districts all over Tateyama.

Planning starts in early August, with a meeting of neighborhood reps to map out a route and air any issues that might arise. Taiko drummers begin practicing around the 20th; the mikoshi/portable-shrine bearers meet in early September and Hachiman Shrine cleans the grounds and installs the huge stands of festival lanterns. Food stall setup begins about the 10th.

Sometimes the mikoshi are all but flat on the ground. Only the lanterns twirling on the long bamboo sticks reach high enough to be seen amongst the crowds.

Locals say the “Floats love the TV and get especially wild when the cameras are pointed their way!”

The next group’s advance men come running in, their turn for revelry, and then the next, lanterns in the fore.  At dusk, the mikoshi line up to rest under the lanterns’ glow.

The neighborhoods vie to outdo each other in drumming, costumes, and sake consumption.  The floats are their pride and joy, with their dynamic carvings of dragons and cranes, lacquered railings, and golden finials, and they cherish the hand-made paper frills when they’re bathed in the dusky light.

Day 2  5:00 p.m.  Hachiman Shrine.  A big drum will give the signal for everyone to come running to begin pull the 10 mikoshi back out of Hachiman so they can head home.  The last one will take its leave around 9 p.m.

Day 2  6:30 p.m.    Tateyama Station.  The matsuri climaxes with the gathering of the floats. Listen for the joyous competition of the taiko drummers, and watch the faces of the smallest children, ringed in blue-and-white headbands, peak out from the boat-float. The enormous golden carp seem to climb up into the lanterns, while the godly dolls soar above the frenzy.

It’s still blazing summer hot, but it’s also jellyfish season, so the beach might not be your best bet. Follow one of the mini-processionals of a participating shrine; seek out the neighborhood sushi joints; stake out a spot near the station for the evening’s festivities; give in to the rhythm of the matsuri.

Or follow the path of an old-timer: “The sun went down and the lantern light shone brightly on the waters of Mirror Bay. The high tones of the flute filled the night sky as our float set off quietly off for home. No running, no stopping. My grandmother loved the festival. She’d say that we kids should hurry to bed but it was hard to tear ourselves away, so we’d follow along to the shrine. By the tie the float was in its place and we were on our way, the moon had climbed high in the sky, and one day became the next. We could hear the far off beat of the drum in the next neighborhood’s float, and it felt like autumn.”

“How to assemble the float, how to pull it, who goes where when, we know all that from the people who came before. But times are always changing, and matsuri has to change, too. They paved all the roads one year, and suddenly our brakes weren’t doing the job anymore. Even a float that was standing still would start skidding down the smooth road, setting off sparks it went so fast. So we had no choice but to change the way we pull.”