“A festival is a garden of delights, and part of the joy of it is knowing there is just too much joy abroad for any one person to absorb.”A.W. Sadler, 1972 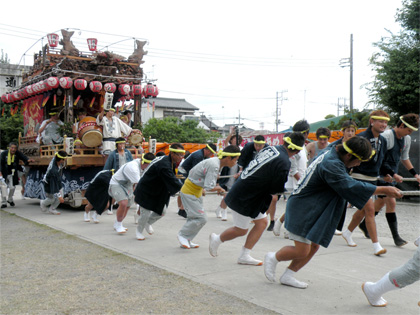 Tateyama Matsuri is sprawling and kaleidoscopic. You will want to be everywhere at once. 13 districts, with their 8 shrines and 15 gods, parade 7 mikoshi and 6 floats up and down their own neighborhoods and in and around Tateyama Shrine. 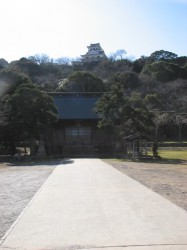 They join and part, join and part, each thrilling to the tune of its own kiyari songs and praying and playing according to its own traditions; collaborating here and there in entertaining song and dance; and finally banding together in a grand spectacle of energy, music, and color.

Each neighborhood maps out its own little local matsuri within the larger festival matsuri route, with stops at homes and shops of local officials and donors and the sites of local memory. The Kasana district heralds the day by trumpeting a conch shell. Ooka parish, dedicated to the sea, pays a ritual visit to the beach, its golden mikoshi glittering in the thin blue light and long shadows of the early morning. Arai men boast of how swiftly they can change direction even in narrowest alleys by whirling their float’s boat on its axis.

If you follow any one processsion for a time, and suddenly come upon another, you’ll find you’re becoming attuned to variations in kiyari melodies. Even the mikoshi and carvings and shouting and jostling, which can seem the same from one end of Japan to the other, take on personality. Here in little Tateyama District within modest Tateyama City, matsuri culture is diverse and intensely local.

Meanwhile, collaboration among the neighborhoods has become tradition, too. A few share a stage for timeworn comic dance performances; others occupy a corner to toss sweets to the crowds amidst the mingling and clashing of their flutes and drums. When two processions meet in a narrow street passage, they greet each other by holding their mikoshi aloft.

A mild competition is in the air but, participants observe, “We don’t fight. We’ve learned to work really well with each other and every year we come up with new ways to liven things up.”

Consult the matsuri map for the latest version of times, locations, and events.

Between events, eat your fill at the festival stands that line “pedestrian paradise” outside Tateyama Shrine from late afternoon through evening on both days.

If you’re interested in the more local processionals, check the web or ask at Tourist Information: some of the 13 districts post their routes.

Take a break from the sunshine and the revelry: 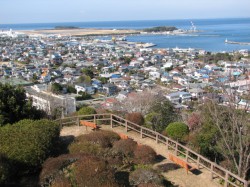 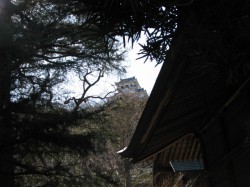 …Got a Few Extra Days?

Tateyamanmachi is the perfect beginning to a summer holiday in Tateyama. Play in the sand, bike in the hills, fish in the sea; eat some sushi, hit another matsuri or two, and finish off with an extravaganza of fireworks and salsa dancing on the beach at the Tateyama Hanabi Taikai on August 8.